The inspection of nuclear power stations is a technically very demanding undertaking. So at the Neckarwestheim nuclear power station a targeted visual inspection was carried out during the routine examination of the inner surface and the thermosleeve on the HCV connection in the nuclear after-cooling area was carried out. To demonstrate the integrity of the components the task was performed by a special Inspector Systems robot.

Precision in the narrowest of spaces 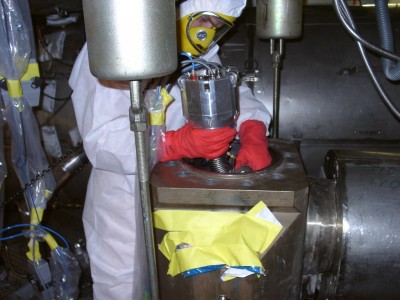 Here the technical difficulty was encountered that for visual pipe inspection in nuclear power stations only a very small amount of space was available.

Thus it was necessary to introduce the inspection robot through an open armature into the pipeline and to direct it by remote control through a curve to the components to be examined. A flexible pipe robot was developed for this with standards robot components by Inspector Systems.

Equipped with a special camera, including a lighting ring and turning and tilting mechanism it provided the required images of the components to be inspected. Comparative visual inspections were also carried out previously at the Brokdorf nuclear power station.