Right up until 1987 steam pipelines in newly constructed power stations were still being cleaned with hot steam produced by the turbines to be brought into operations. Although this "steam blow" cleaned the pipelines, it was time-consuming and cost-intensive. The consequence was later commissioning with costly delays of up to six weeks. 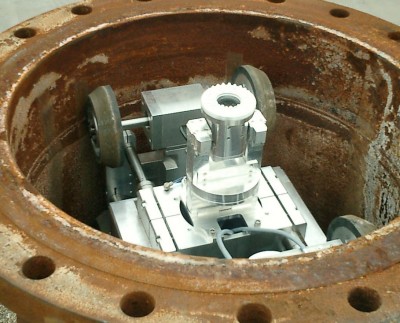 GE developed a new method which used compressed air for cleaning instead of the steam produced by the turbine. The advantage was that the pipes could be cleaned before the turbine was brought into operation. In the mid-1990s the "air blow" method started its triumphal march and replaced the previously used method.

In order to reduce the costs of the "Air Blow" method even further GE looked at it in more depth. At the end of 2006, together with Aquadrill International, Inspector Systems and other partners a new method was specified: the “LARCOM" method (Least Actual Restoration Commissioning Method). The use of compressed air or steam is no longer necessary in this process.

In this method the pipes are internally cleaned with special high-pressure water jets and the degree of cleanliness is documented with Inspector Systems pipe robots.

During the "Aquamilling" process the steam pipes are completely cleaned of corrosion, deposits and loose particles with rotating high pressure jets and a special air/water mixture.

At the end of the process the pipes are inspected with Inspector Systems video and laser inspection robots.

Inspector Systems documents the degree of cleanliness of the pipelines

During various qualification tests in Houston, Inspector Systems (video inspection) and Aquadrill International (pipe cleaning by aquamilling) were certificated by GE for the new LARCOM method.

The LARCOM method was premiered in March 2007. During the new construction of a conventional power station for the Spanish energy provider Union Fenosa in La Coruna, steam pipelines were cleaned using the Aquamilling process and then inspected by Inspector Systems inspection robots.

In addition to the cleaning process high requirements are set for the pipe robots used for video inspection.

The challenge included the following: in addition to the various crawler entry points into the pipeline (open pipeline, drip legs, T-piece, removed valve) there were the courses of the pipelines with up to nine 90° bends (1.5 D) with vertical sections over a height difference of 15 metres.

A masterful performance: the pipelines were completely traversed (up to 40 m) from the entry point and the degree of cleanliness successfully documented.