Last summer, close to the town of Nordenham, the routine overhaul of the Unterweser nuclear power station took place. Together with the owner E.ON Kernkraft and with TÜV Nord an eddy current test robot for cooling water pipelines developed for this special application was successfully qualified and tested in a VE-pipeline. 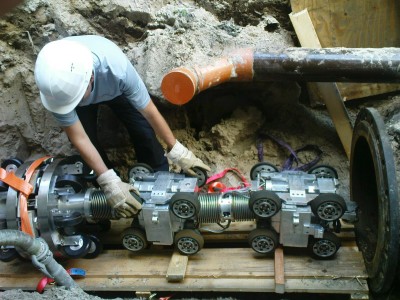 As part of this, INSPECTOR SYSTEMS, as subcontractor of Kontrolltechnik GmbH, made its Inpector 6000 video and laser inspection robot available as a traction unit for an eddy current test module. The resulting eddy current test robot is able to detect reductions in wall thickness due to corrosion, erosion or pitting, and to distinguish between inner and external defect points.

The inspection takes place through the rubber lining of the pipeline. A great advantage of this eddy current method is that the pipeline opened at the connection pieces is neither cleaned nor flooded with a coupling medium, preparations that are a prerequisite for ultrasonic testing. The costs of preparation are lower and a considerable amount of time is saved.

On the basis of the positive results and qualification measures of the 2008 overhaul, in 2009 a further development of the eddy current testing robot will be used for fully inspecting the cooling water pipelines. Pipeline lengths of several hundred metres are to be traversed and 90° bends overcome.