Within the context of the collaboration with the German company BHR Hochdruck- Rohrleitungsbau and the French AREVA NP group during the construction of the new nuclear power station in Olkiltuoto, Finland, the INSPECTOR SYSTEMS robots proved themselves across the board. As a result another contract has now followed – this time with AREVA NP, based in Paris – for the Flamanville 3 nuclear power station. 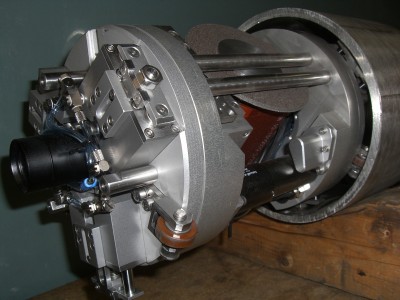 The construction of this third reactor at Flamanville in France was announced by the electricity concern EDF on 21st October 2004. It involves the third generation of pressurised water reactor, the European pressurised water reactor (EPR), which has been under developed by the French company AREVA and Siemens since 1992. This reactor is structurally identical to the one in Olkiluoto. As in Finland, special grinding robots for the qualified grinding of internal welding roots will also be developed for Flamanville during this and the coming year. The grinding robots cover pipe diameters of DN 100 to DN 500 and can, as it is normal for INSPECTOR SYSTEMS robots, effortlessly traverse fittings, bends and vertical pipeline sections. The robots will be used in the primary circulation of the nuclear power station.

The welding seams in this sensitive area must satisfy the high requirements of the safety classes. In addition to the grinding robots, suction units will be developed for the relevant pipeline diameters. These units remove the resulting grinding dust by suction and ensure that the pipeline systems are in a clean condition.