On the basis of the requirement of FMC Technologies and RPT Production to grind the safety-relevant vertical pipelines of an oil platform from the inside, the clients began to intensively sound out the global market. Ultimately they were persuaded by the INSPECTOR SYSTEMS grinding robot technology. 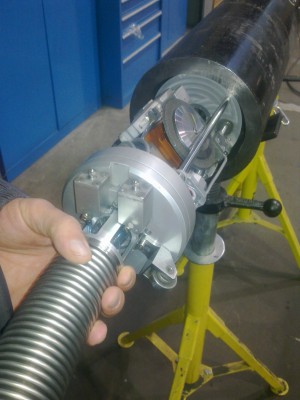 FMC Technologies is an American oil service company based in Houston, Texas. It is also an award-winning one as in 2010 FMC was nominated as the "World's Most Admired Oil and Gas Equipment, Service Company".

RPT Production is a Norwegian company which was established in 1999 and has since then grown into a leading provider in the Norwegian off-shore market. Among other things the company supplies systems for under-sea oil production (subsea systems), measuring technology and drilling equipment. A specialist field of RPT Productions is the welding of “exotic” pipe materials. FMC Technologies operates 27 facilities in 16 countries and has 11,500 employees. The grinding robot for FMC Technologies was sold to the workshop in Dunfermline, Scotland.

The grinding robots consist of an electronics housing and a grinding unit. In this case the INSPECTOR SYSTEMS drive elements capable of climbing and traversing bends could be dispensed with as all the welds were machined during prefabrication. The grinding unit is made up of the components rotating unit, centring unit, radial unit, grinding motor, grinding camera and axial adjuster.

To monitor the grinding process a grinding camera was used. A control unit comprising a power cabinet, control cabinat, operating panel and monitor/DVD unit was used to controlling all the grinding functions.

Since the end of 2011 prefabrication of the vertical pipes has been fully under way in Scotland and Norway with the INSPECTOR SYSTEMS grinding robots doing their work.