In collaboration with its Angolan subsidiary Petromar, the Italian company Saipem was commissioned by BP to manufacture in Angola, Africa, offshore risers for Block 31, one of 4 deep-sea basins of an oil field in which BP holds an interest. 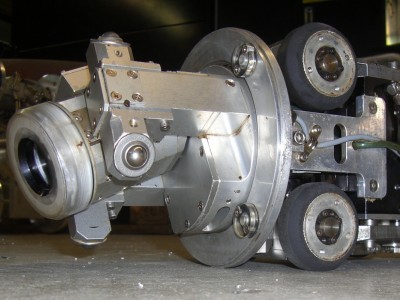 Saipem, which has its head offices in Milan, is active in the field of manufacturing and installing machines, platforms and other products for petroleum extraction, laying pipelines and drilling for gas and oil reserves.

So that special welds in the deep sea pipelines between the tie-in of the riser and the manifold on the seabed meet the quality requirements, Inspector Systems was required to inspect the individual welds with a camera and a laser tool during spool manufacturing. In total several hundred metres of Inconel weld had to be inspected over a period of 12 months.

In addition to ruling out discoloration in the weld area, the narrow tolerances in the misalignment of the pipes and in relation to weld reinforcement had to be checked with the laser and recorded. A demanding task in West Africa!

In this project Inspector Systems did not itself carry out the work on site, but sold a standard type 4000 video/laser inspection robot to Petromar. Because of the enormous pressure of time a new type 4000 robot could not be produced and assembled. Petromar therefore decided to buy an existing type 4000 video/laser inspection robot from the Inspector Systems product range. This robot had already performed well in service contracts for some years.

In spite of the high number of hours the robot had already operated at this time, Inspector Systems provided it with a further six months guarantee. This is in keeping with the company’s philosophy, as even after this operating time Inspector Systems remains convinced of the machine’s quality. After internal acceptance and training of a Saipem operator in Rödermark, a further intensive one-week test and the training of several personnel in Rijeka, Croatia was carried out. The company had constructed a test site with original pipelines there. The inspector robot was then shipped to Africa. On site Petromar was able to start the inspection of the welds in parallel with manufacturing and the associated quality assurance.