Deployment in Finland: Everything but Ordinary

Three years ago, as part of the new construction of a third reactor in Olkiluoto, Finland, Inspector Systems was awarded the contract to grind the various primary circulation pipeline system welds which were of relevance to safety from the inside. 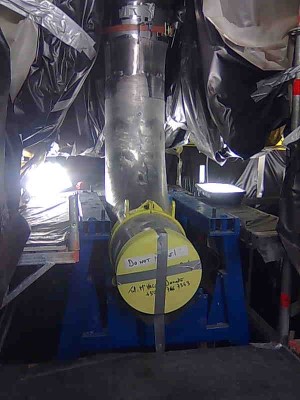 For this a number of grinding robots and exhaust robots were developed, built and qualified for the relevant diameters ranging from DN 100 to DN 500.

After all the preparations had finally been completed and the first pipeline systems had been installed in Finland, the grinding robots which had been developed by Inspector Systems during the previous years now also had to demonstrate what they could do directly on site in Finland. For the different pipe robots and the Inspector Systems crew this meant "working in difficult conditions".

The various grinding and suction robots had to be transported from one place of deployment to the next by means of frameworks and ladders, sometimes introduced through open fittings, and grinding work also had to be carried out in vertical pipeline sections with several bends and reductions in diameter.

However, thanks to the flexible and robust design of the robots, the good planning in collaboration with BHR / AREVA NP and the site-experienced crew this all went without a hitch. During the period spent in Olkiluoto a total of around 130 welds in all diameter ranges from DN100, DN 150, DN 200, DN 250, DN 300 to DN 500 were successfully ground.

Recurring checks by the inspectors of the Finnish operator TVO and the French power station construction company AREVA also always confirmed the required quality of the performed grinding work so that all the companies involved were extremely satisfied with the results.

Before a weld was definitively accepted it had to be proven that the weld met the specified requirements. This was ensured by way of a video inspection of the ground surface, an X-ray of the weld and additional wall thickness measurements using ultrasound.

It also had to be shown that the grinding dust had been completely removed by the various suction robots so that no contaminating substances remained in the pipeline system any more.

Because of the very good quality of the robust robots and the good organisation and preparations, all the described tasks could be carried out by BHR and Inspector Systems smoothly and without delays.