Customers have been asking to be able to watch and test grinding and inspection robots on site at INSPECTOR SYSTEMS. Now the first four tests loops of this type have been brought into operation in Rödermark, Hessen.

For this a total of four pipeline systems were designed and installed with which all the demanded requirements can be tested together with the customer at the time of final acceptance. The complete functional reliability of the robots is then confirmed to the customer. 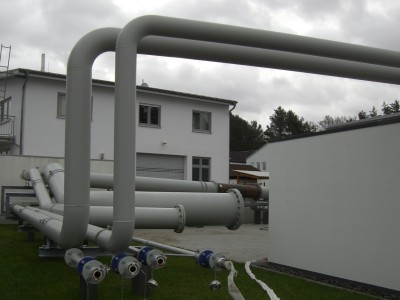 Depending on the type of robot, one of the requirements is that the pipe robot can travel through a dry, partially or fully water-filled pipe.

Connections were therefore installed on the individual pipelines so that the smallest 6-inch pipeline but also the largest 30-inch pipe can be filled with water and travelled through. The traversing of 90-degree bends with a bending radius of 1.5D can also be shown, as at least three to a maximum of six of the necessary bends are built into every pipeline.

One criterion for various inspection robots is that they can travel along pipelines ascending 30° or descending 30°. The approximately 30-metre long test route is also laid out for this criterion.

For traversing vertical pipeline sections INSPECTO SYSTEMS has taken these pipelines via existing garage facilities and through a wall duct into the new works hall built in 2011 so that the test robots can be sent on the approximately 60 metre test run directly from the hall. Flange elements and T-pieces have been incorporated at various points in order to verify the deployment of the pipe robots in the most constricted of spatial conditions.

In order to test the various inspection methods of the test robots it is also necessary to have available a pipe section in which various test reflectors are present. For this an interchangeable section with the documents faults is built into each pipeline diameter.

Conclusion: an impressive test loop which can simulate all the customers’ requirements including for future projects.