Nine robots for the finest grinding

The Flamanville nuclear power plant is situated on the west coast of the French Cotentin Peninsula on the legendary English Channel. The nuclear power plant consists of two producing pressurized water reactors, as well as the type EPR reactor which has been in the construction phase since December 2007. 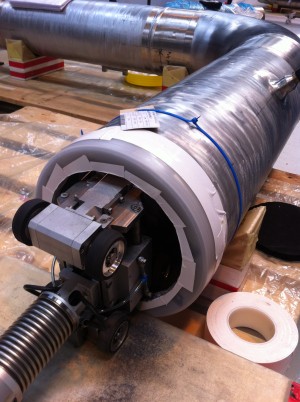 This type of reactor is the third generation of pressurized water reactors, which has been developed jointly by the French Atomholding AREVA and Siemens. This reactor is structurally identical to the one in Olkiluoto / Finland.

The ground surface of the weld root must not exceed an average roughness value of Ra 6.3 µm and the angle of the flanks, which develop through the misalignment of the pipeline, must be less than 7°. The residual wall thickness in the ground area must not fall below the nominal wall thickness. Residues of grinding dust must also be excluded during machining.

In order to meet the high demands, INSPECTOR SYSTEMS developed, produced and qualified altogether nine pipe robots. Three grinding robots, three laser-scanning robots and three extraction robots were sent on their journey through the pipelines, which cover the entire diameter range of 86 to 450 mm. Bends with a bending radius of 1.5 D and vertical pipeline sections can be run through. Standard equipment from INSPECTOR SYSTEMS by the way.

The grinding work in France eventually started at the beginning of 2014 at the two pipeline manufacturers Ponticelli and Fives Nordon (during the prefabrication of the individual pipeline sections). All the weld seams to be ground in the prefabrication were machined in 2014. From altogether more than 150 weld seams, about 60 could be ground during prefabrication. After each grinding process the respective pipe section was cleaned with the help of an exhaust robot. To ensure that the ground weld seam complied with the specified requirements, an inspection of the ground surface was performed and the profile of the ground weld root was determined every 45° using the laser-scanning robot and displayed graphically. In addition a wall thickness measurement was carried out from the outside.

The quality of the grinding work complied with the specifications and was recorded accordingly. A successful start to the machining of the remaining approx. 100 construction site seams in Flamanville was already made at the beginning of 2015.