Inspector Systems is among the TOP 100

The TOP 100 most innovative German SMEs were honoured for the 23rd time. Inspector Systems Rainer Hitzel GmbH is among this year's innovation elite. The Rödermark company previously participated in a challenging, scientific selection process. Innovation management and success were investigated. The innovation competition’s mentor, Ranga Yogeshwar, honoured the top innovator as part of the German SME Summit on June 24 in Essen. 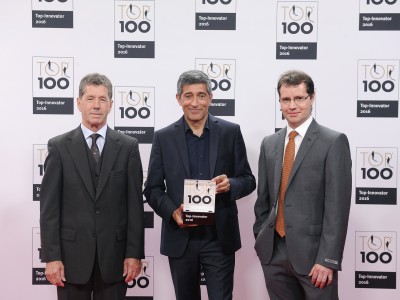 Honoured with the TOP 100 Award, Inspector Systems Rainer Hitzel GmbH impressed primarily with its unconventional and creative measures within the operation. The machine builder develops special robots that inspect and repair pipeline systems from inside. 'We bring the invisible to light', says Managing Director Marcus Hitzel.

The Hessians have thought up something special in order to think outside the box: employees temporarily change their areas of responsibility. The development engineer repairs robots; the mechanic concentrates on the electrical equipment, and the boss assembles parts on the workbench. The motto: a change of perspective creates innovation potential.

There are also weekly management meetings at the company, founded in 1983, to which 14 employees belong. Everyone can introduce his ideas there. Management engages in continuing education 15 days every year. Employees can always take advantage of this privilege on eight days. The company's creativity pays off. It's number one nationally; internationally, the top innovator also features in the Premier League.

Over 4,000 companies took an interest in participating in the TOP 100 this year. Three-hundred and sixty-six of them competed for the qualifying round. Of those, 284 made it to the final round. Two-hundred and thirty-eight ultimately made the leap into the TOP 100 (at most 100 in each of the three size classes). Prof. Dr. Nikolaus Franke and his team from the Chair for Entrepreneurship and Innovation at the Vienna University of Economics and Business re-evaluated the companies. They surveyed over 100 parameters in five evaluation categories: 'Innovation-promoting top management', 'Innovation climate', 'Innovation processes and organization', Innovation marketing/Outward orientation', and 'Innovation success'.

The TOP 100 count among the pace-setters in their industries. The assessment's numbers bear witness to that: Among the companies are 97 national-market leaders and 32 world-market leaders. On average they earned 40 per cent of their profits with market innovations and product improvements, which they brought to market before the competition. Profit growth here was 28 percentage points above the respective industry average. Altogether the MSEs registered 2,292 national and international patents in the past three years. This innovative strength also pays off in jobs. The TOP 100 plan to hire around 9,500 new employees in the coming three years.

TOP 100's mentor, science journalist and TV-moderator Ranga Yogeshwar, is impressed by the companies' quality and is hoping for a signal effect: 'The way the TOP 100 generate new ideas and develop pioneering products and services from them is remarkable in the truest sense of the word. So I'm pleased that the honour makes these qualities visible. Their success will hopefully encourage other companies to do the same, because this culture of innovation will become increasingly important for every company.'

Compamedia has been awarding the Top 100 seal of approval for special innovation and exceptional innovative achievements to SMEs since 1993. Since 2002, scientific leadership has been in the hands of Prof. Dr. Nikolaus Franke from the Institute for Entrepreneurship and Innovation at Vienna University of Economics and Business. Science journalist and TV moderator Ranga Yogeshwar is TOP 100's mentor. The Fraunhofer Society for the Promotion of Applied Research and BVMW are project partners. Manager magazin supports the company comparison as media partner. More Information at www.top100-germany.com.