In the oil and gas processing industry, the requirement for pipe inspections in the plant area is continuously increasing. This is due to a gradually ageing infrastructure and the resulting increase in potential safety risks.

While various suppliers of intelligent pigs operate in the pipeline area that are capable of assessing the condition of a pipe over hundreds of kilometres by pushing the device through the pipeline, there are hardly any inspection robots that can handle and deliver the desired results in the prevailing conditions of the plant area (e.g. in refineries). Vertical pipe sections, many narrow bends and, above all, narrow spaces make it difficult for pipe robots or pigs to enter pipes. In particular, the narrow space conditions combined with a lack of pig traps often make it impossible for intelligent pigs to travel through these special pipe sections in the plant area and to perform the corresponding condition inspection.

Due to this and the need for a new, specialised design of inspection robots in the Russian market, a cooperation between Russian robotic company TUBOT LLC and INSPECTOR SYSTEMS was initiated in the spring of 2018. Within one year, a design feasibility study was carried out to develop a pipe robot concept that met the special requirements for plants in the Russian market. 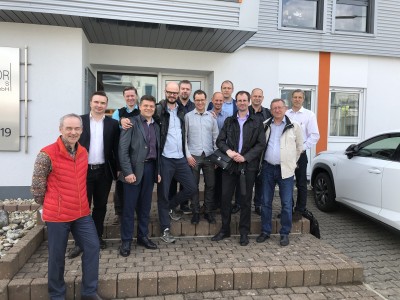 In August 2019, a contract for the development of such a type of robot platform was signed, which defined the various stages of the construction of several prototypes by mid-2021.

Russian inspection company Diascan JSC also joined the team. Diascan is a subsidiary of Russian company Transneft and responsible for the inspection of the company's own pipeline network; it has the necessary intelligent pigs equipped with diverse inspection technologies.

The new robot platform to be developed basically consists of various drive units and an inspection module from Diascan, which can be coupled to the drive units. The design of the various drive units ensures that multiple pipe supports driven pneumatically against the inner pipe wall will increase the traction force to such an extent that the different inspection modules, some of which have an own weight of up to 1000 kg, can be driven horizontally and vertically through the pipeline.

Obviously, they must also be able to do so through the bends. The new drive units to be developed must therefore be capable of generating a traction force of 500 kg per drive unit, for a minimum diameter of just 450 mm. Another technical characteristic is the design of the complete inspection robot for explosion protection applications in filled or partially filed oil and gas lines.

The difficulty of this requirement is that two ATEX protection mechanisms operating independently from each other must be used in parallel to meet the required ATEX class 0.