Complex development: Explosion-proof robot system ATEX Zone 0 for non-piggable pipelines. The internal inspection and testing of non-piggable pipe systems, for example, the distribution infrastructure of gas, petrol or oil pipelines, is often not possible with conventional media-driven inspection tools or can only be realised with great effort in practice and is correspondingly cost-intensive.

In order to solve this problem, a well-known Russian Tier 1 company from the oil and gas industry searched worldwide for an optimal solution, which ultimately prompted INSPECTOR SYSTEMS (Germany) and TUBOT (Russia), both specialists in the development and manufacture of pipe robots, to embark on a joint development project.

After a development phase of more than two years and intensive exchange between the project participants under the difficult conditions of the Covid19 pandemic, a solution was found that fulfils all the technical requirements, such as, for example:

The ATM robot system itself consists of a drive unit, a combination of five individual and simultaneously interacting chain drives, a front camera with four LED driving lights, a control system, a flexible connection including an electronics housing and a cable connector with a rear view camera. 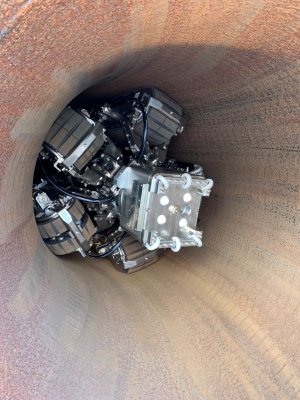 The first ATM drive unit has now been completed, successfully tested and is ready for the forthcoming tests in Russia. For the subsequent practical testing of the entire system under real conditions, a total of three ATM drive units are now being built and each is being paired with an MFL test module, so that with a total tractive force of 1,500 kilograms, enough power is available for the application of the complete test robot.

At the same time as the development of the inspection robots, the Russian end customer is also developing a new type of MFL inspection tool, DN 500, likewise designed in accordance with ATEX 0.